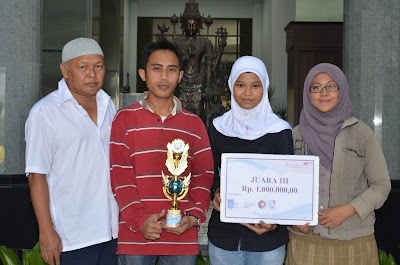 The competition is attended by universities from all around Indonesia. “Initially we send proposal, and 10 finalists with best proposals are taken out of the dozens of submitted proposals from various universities,” as said by Vian to PRASETYA Online, Friday (25/5). The ten finalists consists of 4 groups from ITB, 4 groups from ITS, and 2 groups from UB are chosen to present their proposal with the theme of “Green Technology for Better Maritime”.

UB team, guided by Ir. H. Sukandar, MP, present their work entitled “Ecology of Fish’s Habitat Technology (Ecofishtech), Innovation of Environmentally Friendly Marine Protected Area (MPA) Concept of the Future”. Ecofishtech is a method of development and modification of the existing fish house habitat method. “The technology is one of the efforts to maintain the conservation of coral reefs and as a solution to conservation problem,” Vian said. On the presentation, the participants also brought prototypes of their respective ideas. Fish house habitat technology is based on the strength of the construction of environmentally friendly building, walls made of palm stem waste (bio-briquettes), and energy efficiency (propeller) that can hold the nutrient of coral reef and make it stick strongly, as an innovation of the concept of environmentally friendly marine protected area of the future. “The prototype can be redeveloped into ECOFISHTECH 01, ECOFISHTECH 02 and so on for the perfection of the method in the future,” Juwita explained.

First and second winner of the MITC 2012 is students from ITB and ITS. On the last day, the participants are scheduled to do field trip. On the field trip, the participants visit Tugu Pahlawan, House of Sampoerna, Suramadu, and several other places that become the icons of the Heroic City (Surabaya). “We hope that this effort might help in solving the problems of the damage of coral reefs and fisheries in Indonesia, thus it is expected that coral reefs and fisheries can be conserved for the future generations,” they said. [mit/trans. yasmeen]